The new idea for 1970 was Gift classes. It was a class where exhibitors gifted their entries for us to sell, the Society in turn paid big prize money. Unfortunately, some exhibitors were taking their entries home, so the class was dropped for next show.

In December 1971, Mrs M Stirrup joined the committee, as press officer, along with her daughter Miss J J Stirrup. The annual show made a loss £128 in this year.

The Society loaned their tables to the Cactus Society for their 1972 show at cost of £2 each. Posters pasted to cardboard were put on lamp posts but bad weather destroyed them. The Parks Department had a display at entrance to the show. The Floral Art section were unhappy and wanted a different position in the show.

In 1975, Class 200 Men Only was replaced by Painted Pottery.  In January 1976, Mr J D Horrocks was co-opted onto the committee. A serious outbreak of Foot and Mouth swept the country. Planning permission was granted to the committee to place 20 posters on lamp posts.

Mr J D Horrocks proposed getting sponsors for the 1977 show; they would pay the prize money on specific classes in return for their business name being placed on the show table. It was agreed and the first sponsors were Tycos Tool & Die, Grundy’s Ironmongers of Cleveleys, Burnside Garden Centre, Westlands Florists, Robinsons of Thornton and The Thornton Cleveleys Flower Arrangement Club. There were 25 sponsored classes this first year. The trophies now numbered 29 plus numerous certificates and medals from National Societies. The Parks Department wanted £60 to deliver plants for the display at the entrance this year so Peter Smith from the Fuchsia Society put on a Fuchsia display instead, for free. 1977 was also the year we introduced a tombola stall to raise funds. 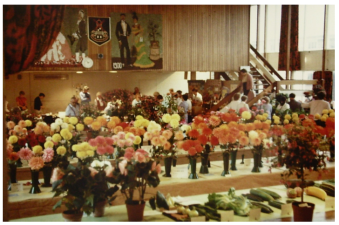 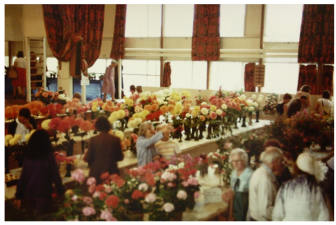 The drought in the summer of 1978 affected all gardeners and farmers alike, this was follow by the Great Storm of 78. The year saw the first artistically decorated show schedule cover which was drawn by Mr A Cross.

In 1979, Prescription charges went up this year to 45p and we received the Marsden Building Society Trophy.